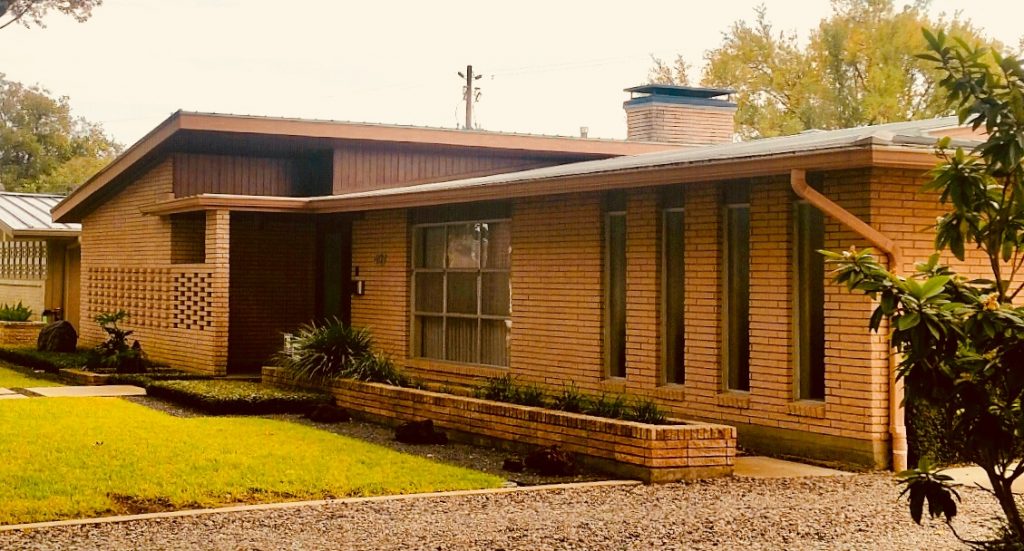 Houston Mod members, Master Mods, and the Mod Squad are invited to celebrate another successful year of promoting and preserving modern architecture and design in Houston.

Master Mod Don Emmite and Jim Power are generously hosting the event at their spectacular home in the Ayrshire section of Braeswood Place. Don’t miss your chance to see this remarkable modern home! Refreshments and lite bites will be served.

Don and Jim’s home is in the postwar addition of Ayrshire Place within the Braes Heights subdivision, developed in 1945 according to a master plan by the landscape architects Hare & Hare. The area is now part of Braeswood Place, a neighborhood featuring modern residential architecture by Joseph Krakower, Lucian Hood, Lars Bang, Brooks and Brooks, and others.

Master Mod Don Emmite, an enthusiast of modern architecture and design for many years, is also a longtime collector and researcher of mid 20th century American design that includes classic modern furniture, Russel Wright designs and vintage appliances from the 1930s through the 1950s. In addition to his collecting and research studies, he has served as curator and designer of several exhibitions most notable being Designing Domesticity: Industrial Design for Modern Living, 1930 – 1960. Installed in the Gallery and Archives at the University of Houston Gerald D. Hines College of Architecture in the fall of 2006, the exhibition showcased household appliances by well-known industrial designers such as Henry Dreyfuss and Raymond Loewy. This groundbreaking exhibit shed new light on this mostly forgotten facet of industrial design.

In 2007, he organized Hugo V. Neuhaus, Jr., Residential Architecture, 1948 – 1966 for Houston Mod which was installed in Architecture Center Houston’s Walter P. Moore Gallery. He also was a consultant for Mid Century USA: American Art and Design, 1940 – 1960 organized by the Oklahoma City Museum of Art in 2005 and Mid Century Revisited, Design 1943 – 1953, a 2004 Brazos Projects Houston exhibit.

In addition to his curatorial experiences, he has given several presentations on the subject of industrial design locally and in other states including Price Tower Arts Center, Frank Lloyd Wright Architect, Bartlesville, Oklahoma.