Travis Broesche was born May 6, 1911 in Ellinger, Texas. He attended Blinn College and the University of Texas in Austin, graduating with a B.S. degree in Architectural Engineering in 1935. He was a member of Tau Sigma Delta, honorary architectural society, and his senior year was awarded the AIA Citation as outstanding senior student in architecture. Mr. Broesche began his practice of architecture in Brenham, designing several buildings funded by the Public Works Administration, including: the Washington County Courthouse and Brenham City Hall. During WWII, Travis and his family moved to San Antonio where he served as Chief Architect for the Hondo Navigation School and designed and supervised the construction of several Army camps out of Fort Sam Houston, San Antonio. Following WWII, Travis and his family moved to Houston, and he continued his architectural practice there for over 40 years. During most of these years, his firm was known as Broesche and Condon Architects, AIA. While practicing in Houston, he designed and supervised the construction of over 150 churches throughout Texas, as well as hospitals, schools, and other commercial and public buildings and private residences. In 1962, Mr. Broesche and his firm entered the first architectural competition sponsored by the Houston Independent School District, a competition intended to facilitate the award of school design contracts on a merit basis. The firm won first place and, on that basis, was awarded contracts for four elementary schools designed using the winning plans. The first of these schools was Walnut Bend Elementary. Mr. Broesche was an organizing member of Faith American Lutheran Church in Bellaire and, over the years, served that church in many capacities, including President of the congregation. In the late 1970’s Mr. Broesche began phasing out his architectural practice in Houston and moved his residence to Brenham. He continued to practice architecture in Brenham, first in association with Ben Boettcher, and later as a solo practitioner. Following his full-time return to Brenham, his architectural projects included Blue Bell Creamery offices and Visitor’s Center (and other Blue Bell facilities throughout Texas and neighboring states), Trinity Medical Center, the remodeling and expansion of St. Paul’s Evangelical Lutheran Church, and Kruse Memorial Lutheran Village, phases 1 and 2. He finally ended his 60-year architectural career in his mid- 80’s because of failing eyesight. He passed away at age 92 on Aug. 22, 2003. 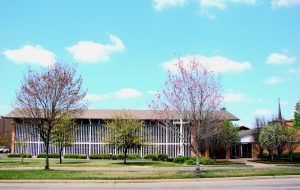 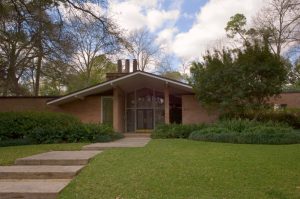