Richard Stewart Colley, architect and city planner, was born in Fort Worth, Texas on June 18, 1910. He entered the architecture program at the Agricultural and Mechanical College of Texas (now Texas A&M University) in 1926 but left in 1931 without a degree. From 1931 to 1933 he worked in Monterrey, Nuevo León. In 1934 he woked on the restoration of the eighteenth-century Nuestra Señora del Espíritu Santo de Zúñiga Mission in Goliad for the National Park Service. Colley moved to Corpus Christi, Texas and started his own office in 1938. Except for an eighteen-month tenure as director of planning for the city of Corpus Christi (1944–45), he maintained an independent architectural practice until his death. During the 1940s he produced buildings, especially houses, that were simple and straightforward, stripped of historical detail but often bland. A more positive approach to modernism became evident in his work after 1949, as he began to respond to conditions of site and climate with the use of roof overhangs, sunscreens that doubled as wind baffles, building masses oriented to the prevailing breeze, integration of indoor and outdoor spaces, tropical plants, and provocative color combinations. During the 1950s the city of Corpus Christi commissioned Colley to design a series of buildings for a new municipal complex on Shoreline Boulevard. His designs, which included a city hall, a civic center and auditorium, and an exposition hall, were widely published in leading architectural journals. Colley was also responsible for multiple buildings in McAllen, Victoria, Houston, and Dallas. In the early 1950s he became interested in the lift-slab method of construction developed by the Southwest Research Institute and used by architect O’Neil Ford for the new Trinity University campus in San Antonio. Colley designed a number of buildings in South Texas using the new method and helped to refine the process. The most important project on which he and Ford collaborated was Texas Instruments Technical Laboratories in Houston (1957), and Texas Instruments Semiconductor Building in Richardson (1958). In these Colley was responsible for the innovative integration of supporting structure and mechanical servicing.In the 1960s Colley received a series of commissions to design further buildings for Texas Instruments, and he planned and supervised the construction of buildings in Argentina, El Salvador, the Philippines, Hong Kong, Malaysia, and Japan. Colley was a member of the American Institute of Architects. In 1983 he was awarded an honorary doctorate by Texas Tech University in recognition of his contributions to the architecture of Texas. He died in Corpus Christi in 1983. 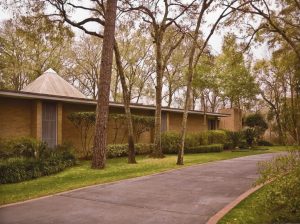