Born in Beaumont, Texas, C.C. “Pat” Fleming grew up in Arizona and studied architecture at the University of Texas, but did not graduate. After a trip to Europe sparked his interest in landscape architecture, he began work for Austin landscape contractor Mrs. C.B. Whitehead in 1930, carrying out planting plans designed by Hare & Hare for the University of Texas. During a stint with the National Park Service as a landscape architect, Fleming was sent to Houston in 1935 to oversee the landscape development of San Jacinto Battlegrounds,  where he worked with architect Albert Sheppard. He was appointed to Houston’s Planning Commission in 1936, and became the assistant director of Houston’s first Housing Authority in 1938. From 1937 to 1942, Fleming and Sheppard established the firm Fleming & Sheppard, which designed residential gardens in neighborhoods throughout Houston, including River Oaks, Shadyside, and Broadacres, often for houses designed by architect John Staub. Ima Hogg commissioned the firm to design the north terrace and the Diana Garden at her estate, Bayou Bend. In 1943, Fleming became the first director of Houston’s Parks and Recreation Department, spearheading improvements on Hermann Park.  He re-entered private practice in 1945, eventually forming Fleming Planning Associates, and designed the 27-acre corporate campus (one of Houston’s first) for the Prudential Life Insurance Company in 1952. After initially retiring in 1970, Fleming resumed his practice in 1984. His designs were featured in House Beautiful, Better Homes and Gardens, Southern Accents, and other publications. He passed away in Houston after a prolonged illness. 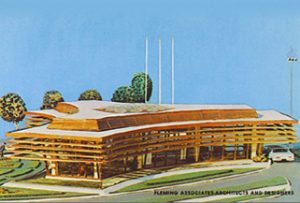