Wylie Walker Vale, Sr., was born in Marceline, Missouri on July 22, 1916. His youth was spent in St. Louis, MO, after which his family moved to Houston where Wylie graduated from San Jacinto High School in 1934 and Rice Institute in 1939 with a Bachelor of Science in Architecture. He enlisted in the U.S. Navy in 1943. Wylie returned to Houston after World War II and helped organize Piney Point Village. After working for the leading Houston architects such as Harvin Moore, Hermon Lloyd, Frank Zumwalt and Travis Broesche, he established his own firm of Wylie W. Vale & Associates. He was known for his unique approach he called “Contemporary Country,” designed over 400 residences, 100 schools, 50 churches, commercial, collegiate and institutional projects throughout the country, and had a significant impact on the neighborhoods of River Oaks, Memorial and Tanglewood. His new partnership in the 1960s became one of the largest architectural firms in Texas and designed many notable projects. Wylie designed his last house at the age of 86. He died in Austin, TX at the age of 96 on Jan. 24, 2013. 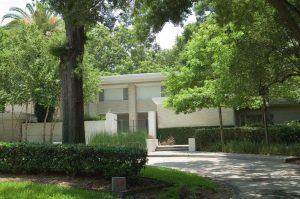