The renovation of this 1959 Meyerland home transformed a demure structure into a modern beauty. Mr. and Mrs. Alan Finger, who had owned the home since 1959, saved the best features of the original home while greatly increasing the square footage and the mid-century appeal in 1974. The original herringbone wood floors still remain throughout most of the house, as well as poured terrazzo and all original cabinetry.

The home was featured in the October 1976 issue of Houston Home and Garden magazine. The home remained in the Finger family until 1999.

By Carol Hopkins Update: The text above was provided by a previous owner. In 2012, Houston Mod was informed (in error) the house was designed by Lars Bang. David D. Foster was the architect for the 1974 additions. Foster is a 1972 graduate of the University of Houston College of Architecture. Foster said the wood floors were added in 1974 and the original terrazzo floors were seamlessly matched by the same company that installed the original floor. The slats on the front screen are made from durable wood often used on elevated floors in wet locations such as commercial kitchens. In 2015, Houston Mod learned Alan Finger commissioned architect Arthur Steinberg to design the house in 1959. The house was completed in September 1961 and the family moved in as Hurricane Carla, the most severe landfalling Atlantic hurricane in the United States, approached. 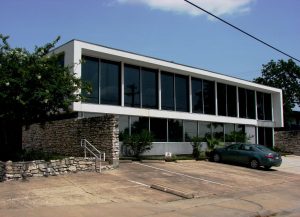 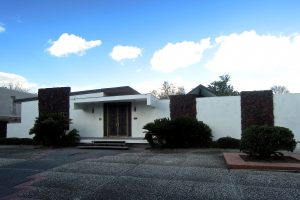 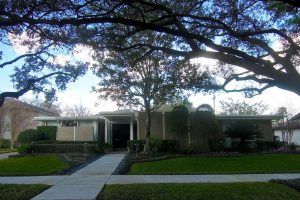