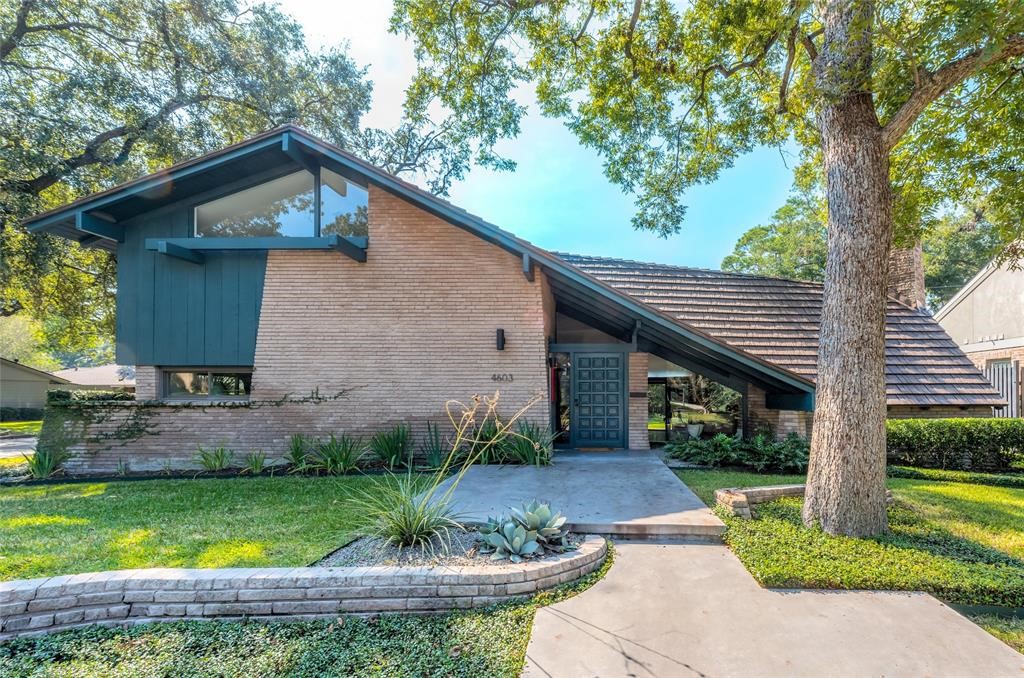 For their own home, architect Allen Williams and his wife Thesalone, an interior designer, were among the first to purchase a lot in Afton Oaks but waited six years to build while perfecting their design.  The result is this unique and still stunning modernistic composition in brick glass and wood.  This was the Williams’ opportunity to be bold without questioning clients. Soaring ceilings, large expanses of glass, multiple levels, and free flowing brickwork compose the central living spaces. A triangular theme is carried through in window shapes and the openings in the brick columns providing the conditioned air.

The kitchen, viewing a walled side garden, still contains the nifty original cabinetry raised on brick platforms and topped with the original marble countertops. Williams even incorporated a chess game board into the terrazo floor at the base of the stairway for his sons. Since we last saw the house, the original terrazzo floors that had been hidden by carpet and dark wooden flooring have been unearthed and the wall between the kitchen and dining area has been removed, returning the architect’s original vision of the house.

Allen R. Williams (1916-1978) was from Abilene, Texas.  He was a B-26 Marauder bomber pilot in World War II. His architectural education was both in the Beaux Arts style and modern, graduating in 1946 from the University of Texas School of Architecture. The architecture he studied in France, Germany and particularly Maastricht, Holland was influential in establishing his style. In Houston, he briefly worked with Staub, Rather & Howze and partnered with Mack G. Reed before establishing his own firm, working alone and with his wife for the rest of his career.  He designed hundreds of projects, both residential and commercial, a number of them for developers Roy Harris and W. E. Keep.  A concentration of his work is located in the areas of Ripple Creek, Tynewood, Lamar Weslayan and Meyerland. Thesalone Williams also worked in the Interior Design department for Joske’s department store. She serves as a Master Mod, Houston Mod’s advisory board, and lives in Houston, recently celebrating her 101st birthday.