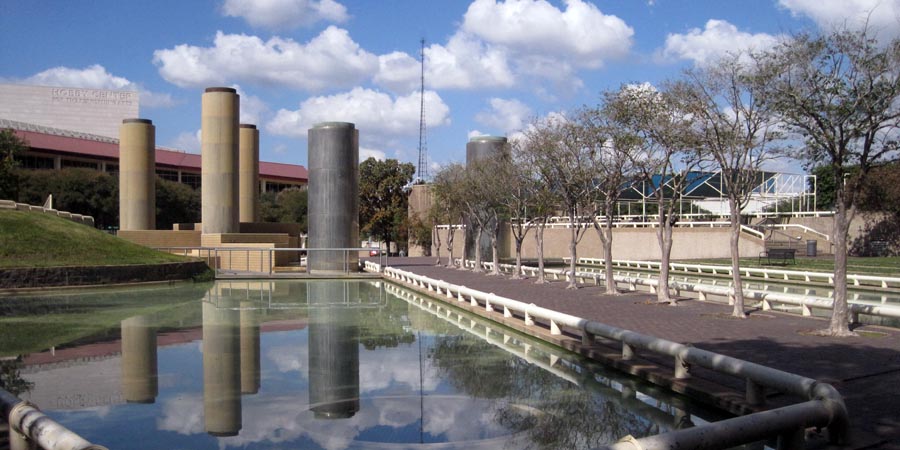 Tranquility Base was the landing location for the Apollo 11 Lunar Module, or “Eagle”, on July 16, 1969. Four days later, on July 20, 1969, astronaut Neil Armstrong declared upon landing on the moon, “Houston, Tranquility Base here, the Eagle has landed”. On July 20, 1979, Houston celebrated the anniversary of the first men to land on the moon at the opening dedication of Tranquillity Park.

Before there was Discovery Park, Tranquillity Park served the role. Describing his design for the Houston Chronicle in July 1979, architect / landscape architect Charles R. Tapley said:

“I see the park as a firecracker… It’s a place where things are going on, a place to mark a momentous event in an unusual way. It’s a discovery park.”

Houston Mod invites you to join us Saturday, July 20, 2019 to celebrate Tranquillity Park’s 40th birthday and the 50th anniversary of the Apollo 11 lunar landing. Learn more about the park, including why the park’s name features two ‘Ls’, and explore commemorative design features including the earth and moon mounds; replica of Armstrong’s footprint on the moon; and rocket-like fountain heads that double as exhaust outlets for the parking garage below. After the tour, participants may choose to walk or ride the rail to Discovery Green’s family-friendly Apollo 11 moon landing celebrations, which includes a screening of the widely acclaimed 2019 documentary, Apollo 11.

Completed in August 1969, 10 years after the initial design concept was announced and the parcel was secured by the city, the creation of Tranquillity Park required conquering many complications. Planning, funding and implementing the design included several starts and stops. Now, at 40 years old, Tranquillity Park is vulnerable to insensitive alterations or demolition as its historic value becomes lesser-known, maintenance decreases, and current downtown improvement plans fail to recognize the importance of the site to our city and nation.

Houston Mod seeks to shed light on the significance of Tranquillity Park as a masterful modernist urban park designed in celebration of one of our nation’s most significant historical events by Charles R. Tapley, an award-winning and influential architect and landscape architect. The design of the park is iconic of its era, defined by distinct geometric forms, dramatic topographic changes, water features, and native Texas trees and plants. We hope you will join us on Saturday, July 20 to learn more.