In 1946, William Caudill and John Rowlett, two architecture professors at the College of Texas A&M, became partners and founded the architecture firm of Caudill and Rowlett in Austin, Texas. The two men combined their readjustment allowances from the Navy, a sum of $1000 each, to start the firm. After a difficult first year, Caudill and Rowlett relocated their office to College Station at the Southgate Center.
In 1948 Wallie Scott, Caudill’s former student, joined the partnership and the firm became Caudill Rowlett Scott, Architects. The same year, William Peña, another former student of Caudill and Rowlett, became the fourth partner of the firm but requested to leave the firm’s name unchanged.

During the first two years, most of the firm’s work came through the design of houses in Texas and Oklahoma. But in 1948, in large part due to Caudill’s book Space for Teaching (1941) and John Rowlett’s degrees in architecture and education, Caudill Rowlett Scott landed their first project with an elementary school in Blackwell, Oklahoma. Through this project, CRS pioneered the revolution in schoolhouse design that would come into fruition across the United States during the 1950s.

The firm expanded steadily, and became renowned for its expertise in school design. In 1952, John Rowlett opened the firm’s first regional office in Oklahoma City, and in 1957, the firm opened another office in Corning, New York. The same year, CRS became one of the first architectural firms to incorporate. When the main office relocated to Houston in 1958, it was immediately the largest architectural firm in the city, with seven partners (Bill Caudill, John Rowlett, Wallie Scott, William Peña, Tom Bullock, Ed Nye, and Charles Lawrence).

By the 1960s, CRS had become an integrated design firm, famous for its team approach which combined the efforts of architects, engineers, and planners. The firm ventured into higher education and health care facilities projects during this decade. It was also at this time that the architectural projects became international in scope as CRS began work in Saudi Arabia.

In 1971, the firm went public under its new name, CRS Design Associates. During this decade, the firm continued to expand as it acquired several smaller companies. CRS Group, Inc. became CRSS in 1983 when it acquired J.E. Sirrine, a process engineering company. Ironically, William Caudill died the same year, without witnessing this last transformation in what once had been a small town business to the largest architecture/engineering/construction corporation in the U.S. 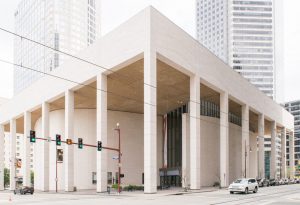 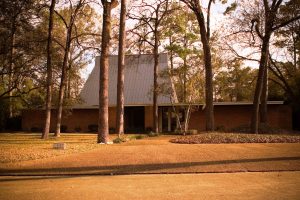