Alden Ball Dow was born in Midland, Michigan in 1904.  The son of Dow Chemical Company founder Herbert H. Dow, it seemed natural that he would study engineering and join his family’s company but his interests shifted to architecture and he transferred to Columbia University, graduating in 1931.  That year he married the daughter of a Dow Chemical executive.  In the summer of 1933, Alden and his wife were apprentices at Frank Lloyd Wright’s Taliesin in Wisconsin, and Alden opened his own firm in 1934.  At the Paris International Exposition of 1937 he won the Diplome de Grand Prix for two projects in Midland: his own home and studio and the John and Minnie Whitman house. Alden Dow’s connection to Texas comes from the Dow Chemical Company’s expansion to the Texas Gulf Coast just before World War II.  At the request of his brother Willard H. Dow, then president of Dow Chemical, Alden designed a hotel and several modern houses in Freeport, Texas for Dow Chemical employees.  After war broke out he moved to Houston and later Freeport to oversee construction of housing for defense workers employed at Dow Chemical.  He designed dormitories, homes, a dining hall, and schools.  Probably his biggest contribution to the area came from his design of the city of Lake Jackson, carved from raw, swampy forest into a charming, tree-lined town of inexpensive but elegant houses.  Alden designed the not only the houses, but also curving street layouts, the modernistic downtown buildings, a movie theater, two churches and two schools. The first residents moved in in 1943.  While in Texas during the war, he became friends with Houston architect Karl Kamrath and assisted the MacKie and Kamrath firm with local projects while the principals of the firm were in military service.  This relationship led Alden to introduce Kamrath to his old mentor Wright, who became a major influence on Kamrath’s work.  In 1947, Alden and his family returned to Midland, Michigan, where his career flourished and he became one of the nation’s most celebrated organic architects.  He became known as an innovator in materials and building practice and was a strong advocate for building and living in close harmony with nature. He was named the architect laureate of Michigan shortly before he died in 1983. 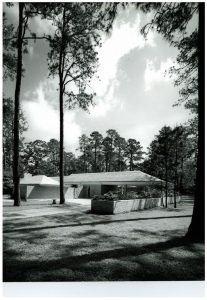