Ulrich Joseph Franzen was born in Düsseldorf, Germany in 1921. His family emigrated to the United States in 1936. He obtained an undergraduate degree from Williams College, and after one semester at Harvard University he joined the Army. After World War II, he obtained a master’s degree from Harvard in 1950. By 1951, he was working for I. M. Pei. He left Pei and formed his own firm, Ulrich Franzen & Associates, in 1955.

The Alley Theater completed in 1968, was Franzen’s first prominent solo project. Critics praised it as a triumph of the Brutalist style, characterized by the use of rough exterior materials like concrete. Franzen also designed the headquarters for the Miller Brewing Company in Milwaukee, WI in 1976.  In 2005, he was commissioned to create the new Miller Corporate Pub and Meeting Center, fully renovating the ground floor. The project received a 2005 American Institute of Architects Wisconsin Honor Award. His other notable projects include the East and West towers at Hunter College and the Philip Morris headquarters in New York City. 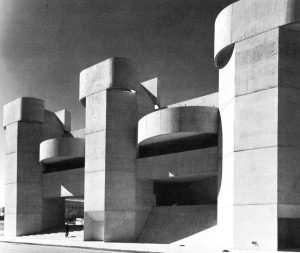