Ludwig Mies van der Rohe (commonly referred to a Mies, his surname) was a German-American architect born in Germany in 1886.

Mies was a director of the Bauhaus working alongside Le Corbusier and Walter Gropius.  After Nazism’s rise to power and forced closure of the state supported school, he emigrated to the United States in 1937, accepting a position to head the architecture school at the Armour Institute of Technology (now the Illinois Institute of Technology), in Chicago. One of the benefits of taking this position was that he would be commissioned to design the new buildings and master plan for the campus. His masterpiece, the S.R. Crown Hall, built as the home of IIT’s School of Architecture is widely regarded as Mies’ finest work, the definition of Miesian architecture.

In 1944, he became an American citizen and worked from his studio in downtown Chicago for his entire 31-year period in America. His significant projects in the U.S. include the residential towers of 860–880 Lake Shore Drive, the Chicago Federal Center complex, the Farnsworth House, and the Seagram Building in New York. These iconic works became the prototypes for his other projects. He also built homes for wealthy clients.

Mies also designed modern furniture pieces using new industrial technologies that have become popular classics, such as the Barcelona chair and table, the Brno chair, and the Tugendhat chair. His furniture is known for a mix of leather combined with modern chrome frames, and a distinct separation of the supporting structure and the supported surfaces, often employing cantilevers to enhance the feeling of lightness created by delicate structural frames.

He is regarded as one of the pioneers of modernist architecture.

Mies van der Rohe died on August 17, 1969. His ashes were buried near Chicago’s other famous architects in Chicago’s Graceland Cemetery. His grave is marked by a simple black slab of granite. 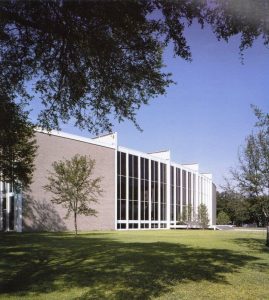