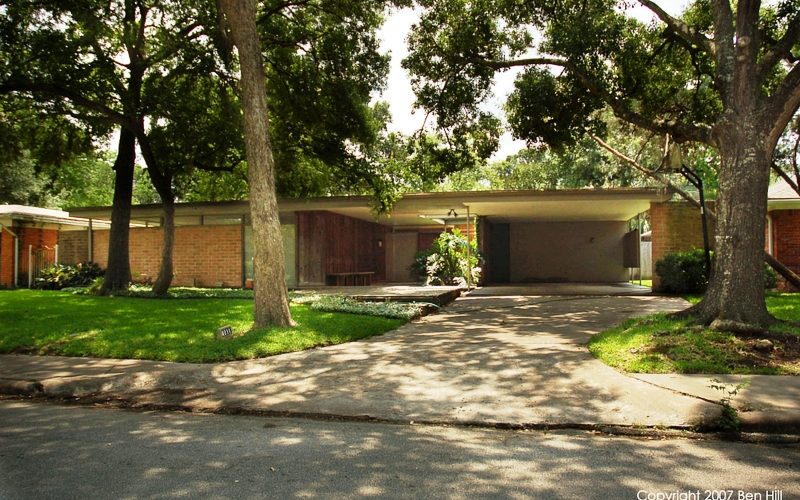 Lars Bang designed this house in early 1952 for the Bendit family. Mr. Bang has recently been quoted as saying, “They allowed me to do almost everything the way I thought it should be.” Bang loved Mies Van de Rohe’s 1929 Barcelona Pavilion and based the design on it. He presented the plans to the Bendits and they liked them very much. Bang explained the process of having a house built and suggested having several builders prepare construction bids. Mr. Bendit asked that Bang build the house himself and serve as his own general contractor. Bang agreed and went to work. Since Bang was in charge of everything, he was able to see that his ideas were carried out to his specific wishes. About the time the house was to break ground, the Bendits needed to move out of the country for work and left Bang in charge. Bang and Bendit set up a company called B&B to handle the finances of building the house and Lars prepared monthly reports for Mr. Bendit. At that time, Ayshire was not considered a very desirable neighborhood. Bang would have liked to have buit the house in a better area but the budget did not allow a more expensive location.

At the time this house was built, standardized sliding doors were still a couple of years away. All the doors in the house had to be detailed and custom made. Unlike the later sliding doors that roll along the floor, these hang from the ceiling tracks. Bang had to devise a lot of details on site to build the house as he envisioned it, including choosing furniture. Bang was also very concerned about the durability of the brick and saturated every brick several times with a silicone sealer.

Shortly after the house was built Mary Kraft of Good Housekeeping was in Houston and saw it and loved it. She sent a top rated photographer to shoot it. He came in a custom fitted van full of equipment and worked there at the house for an entire week. Bang met with him daily to assist as required. The house was featured in Good Housekeeping as one of the top small houses of 1953.

Mrs. Bendit had a terribly painful back problem. She had back surgery but unfortunately did not survive. Heartbroken, Mr. Bendit decided to sell the house and move away from Houston after her death, having only lived there about two years.

The house was bought by the Kamin family and featured on the 1957 Contemporary Arts Association Modern Home Tour. It was featured in the Houston Chronicle in an article on the tour houses called “Contemporary Homes Stress Convenience” on April 7, 1957. In the article the materials of Formica, terrazzo, and wood are mentioned. Also noted are several indoor gardens planted with large green plants which are helped by skylights. Finally, the article calls attention to the patio and swimming pool.

The house is currently owned by sympathetic Modernist owners who are restoring it.

The house is featured in the recent book USA: Modern Architectures in History by Gwendolyn Wright. 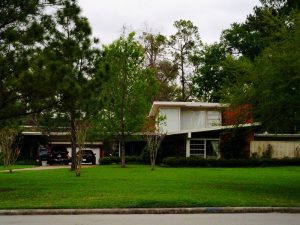 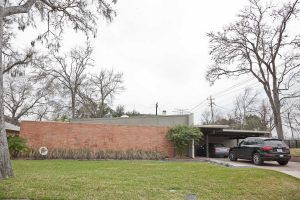