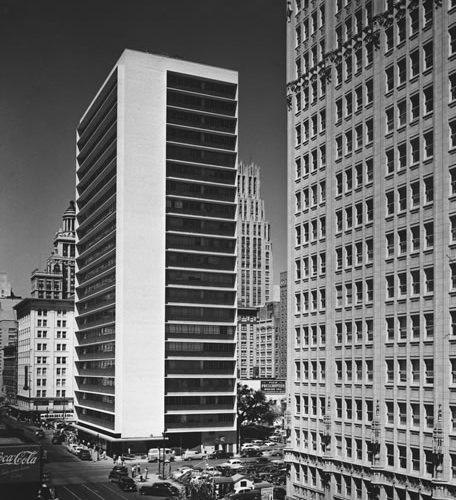 The Melrose Building was the first modern office tower in Houston. While in the late 1940s and early 1950s there were other large office buildings under construction, such as the Hermann Professional Building by Kenneth Franzheim and the City National Bank Building by Alfred Finn, no other building received the same degree of coverage in the local press. It was not much of an exaggeration to say this building served as most Houstonians’ introduction to modern architecture. Its prominent location was also important. At the time it stood out for visitors entering downtown from the south east via the brand new Gulf Freeway, Houston’s first modern freeway, completed the same year as the Melrose Building.

Its architectural design was quite advanced. Hermon Lloyd gave the building its distinctive horizontal and vertical brise-soleils based on his impressions of South American practices. (He later used the Ministry of Education Building of 1943 in Rio de Janeiro by Lucio Costa and Oscar Niemeyer as an inspiration for the distinctive south façade of the Americana Building designed in 1954 but not built until 1961.)

Technologically the building was distinguished for its use of the “Carrier Conduit Weathermaster Air-Conditioning System” which allowed each office to be separately heated or cooled according the occupants’ desire. The architects also used Haydite, a type of lightweight concrete made with an aggregate of expanded clay and shale that was designed for use in humid climates to prevent the accumulation of moisture on its surfaces.

An exterior change was made in 1969 when the original turquoise glazed ceramic tiles in the window spandrels were covered by bronze colored anodized aluminum panels and the windows were tinted to match.

The building was rehabilitated into a hotel and renamed Le Meridian. 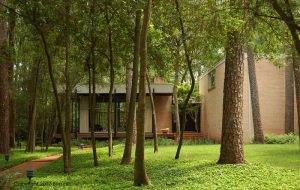