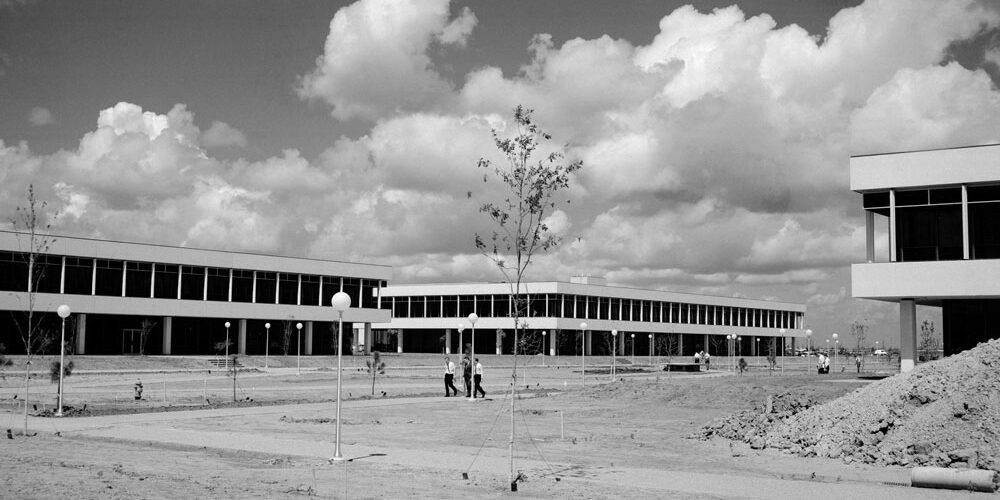 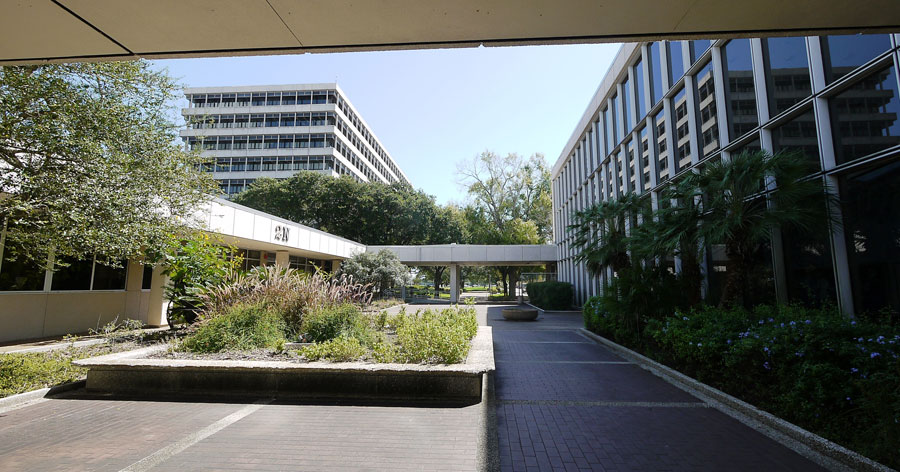 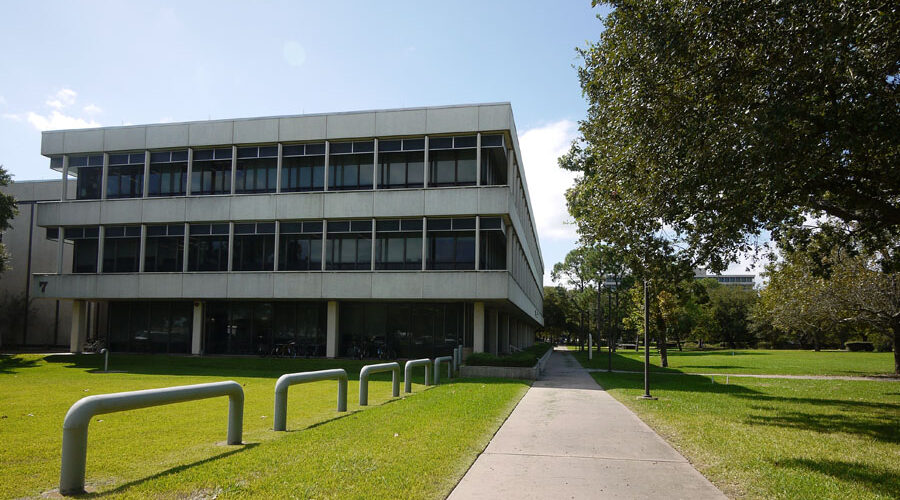 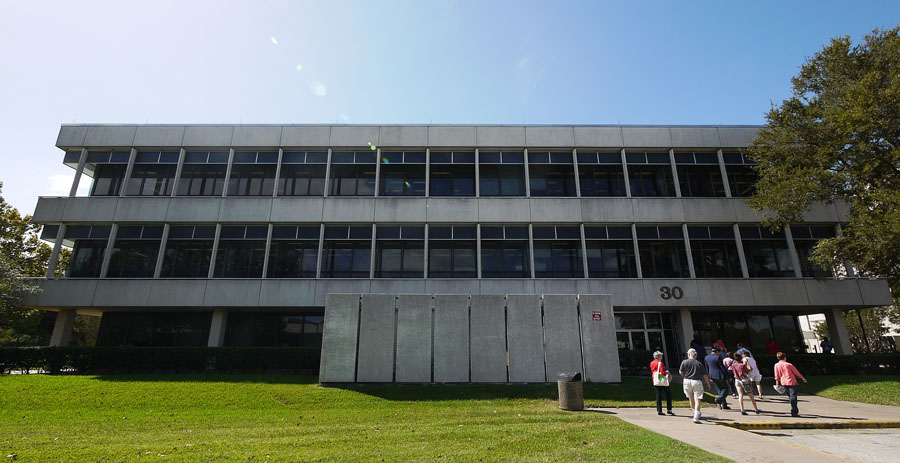 On May 25, 1961 President John F. Kennedy, solidified the US in the space race in declaration to congress “to achieving the goal, before this decade is out, of landing a man on the moon and returning him safely to the Earth”. The expansion of NASA accelerated and Houston was selected for a new Manned Space Center. Houston was choosen in part for meeting site location criteria to have weather suitable for year round port and commercial jet access, a nearby university, and 1,000 acres of land within a specific budget. Texan politicians also played a role in bringing NASA to Houston, including Lyndon B. Johnson an early supporter of the space program.

NASA announced the new Manned Spacecraft Center (MSC) would be located in Houston on September 19, 1961. By January 1962, a master plan for the MSC had been drafted and issued by Brown & Root, Inc. with Charles Luckman Associates, Brooks & Barr, Marvin C. Moore, Mackie & Kamrath, and Wirtz, Calhoun, Tungate & Jackson. Construction began the same year, and the MSC opened in late 1964. Building 30, the Mission Control Center opened 1965. The MSC was renamed after late President Lyndon B. Johnson in 1973.

The master planned Houston MSC consists of a series of buildings with a unifying modern style. The design philosophy dictated modular construction in direct response to the condensed time frame allotted to complete the campus as a vital step in the space race. The campus is believed to be one of the largest collections of postmodern Brutalist architecture in the United States.

The buildings are cohesive in material, comprised of pre-cast exposed aggregate facing (PEAF) panels, recessed “ribbon” windows, and equal-sized repetitive patterns. Although the buildings differ in size and scale, all are rectangular in form and observe a single grid. No individual building out performs another in design detail or materiality, with the exception of the decorative entry screen at Building 31, Mission Control Center.

A great amount of flexibility was designed into the buildings to accommodate occupancy changes over time. A basic planning module of 4’-8” was observed across buildings as determined to provide “the greatest flexibility with relative economy and can be coordinated with standard building materials and fixtures”. As further noted in the Master Plan, “although the precast panels in many cases are larger than 4’-8” and may be rectangular in a horizontal sense or vertical sense, proportions are maintained to provide continuity of appearance between buildings”. Buildings and “building groups” were strategically related in shape, composition and modulation to allow each to act as elements that could be rearranged as the Master Plan quickly evolved. The buildings are to be viewed and approached from multiple sides.

In 2017, JSC completed a “Historic and Architectural Survey and Evaluation of Facilities that have Reached the Age of 45-50 Years” which included the determination of eligibility of individual buildings for the National Register of Historic Places and contributing buildings to the JSC Historic District. Of the 400+ JSC structures, 55 buildings were determined to be individually eligible for NHRP listing. Fifty buildings were determined to be contributing to the JSC Historic District as a united set of buildings that conveyed a visual sense of the overall historic environment. Two buildings are designated National Historic Landmarks: Apollo Mission Control Center, and the Space Environment Simulation Laboratory.

Mission Control Center, Building 30, was designated as a National Historic Landmark (NHL) in 1985. Its significance is associated with the buildings “close association with the manned spacecraft program of the U.S.” and for its use “to monitor nine Gemini and all Apollo flights, Apollo-Soyuz, and all recent Space Shuttle flights.” Building 30 continues its historical control center functions for the International Space Station at the second level control room. The third level control room, the historic Apollo era control room, underwent a major two-year restoration returning the room to how it appeared in July 1969 during the Apollo 11 mission. The restoration was completed in July 2019, just in time for the 50th anniversary of Apollo 11 which landed the first men on the moon. Local firm Stern and Bucek Architects were the lead restoration designers, who worked alongside Ayuda, project management; GRAVitate, preservation and technical project management; Cosmosphere, console restoration; and a long list of consulting experts.

The NASA Manned Space Center / Johnson Space Center is considered endangered as the agency undergoes instruction to both reduce footprints at all NASA campuses and simultaneously construct new buildings and additions for specific new uses. According to a 2020 NASA report prepared for the Advisory Council on Historic Preservation, “between 2015 and 2020 NASA demolished 449 real property assets. Of these, 50 (11 percent) were historic properties that account for almost 35 percent of the square footage demolished. During the next five years, NASA plans to demolish 335 assets, 62 of which are already identified as historic properties. An additional 96 of the 335 assets are yet to be evaluated”.

Houston Mod continues to advocate for the retention and reuse of the existing historic JSC buildings, as an unparalleled historic midcentury modern government campus comprised of structures specifically designed to adapt. Houston Mod serves as a consulting party for the NASA Historic Preservation and Real Property Office, in review of proposed new construction and additions at JSC.