Thanks to Houston MODern Market for sponsoring this FREE event. The next Modern Market is scheduled for November 2022!

This house was built in connection with the 1964 New York World’s Fair, but before research by Houston Mod, nobody remembered, not even the long-term owners.  All aspects of the World’s Fair House were upgraded including the brick and natural stone exterior, extensive covered patios, two fireplaces, and the innovative kitchen complete with custom cabinetry and double Flair oven with upward-gliding glass doors. Formica was the major sponsor and many of their products were incorporated. Illumination is provided by four sky domes plus recessed lighted ceilings and special mod fixtures, all well maintained.

Dick Coneway of Trend Setter Homes built the house.  He was an architect who graduated from Texas A & M in 1931 and built a number of upscale houses including several featured in the Parade of Homes.  The New York version of the house was designed by architect Emil A. Schmidlin.  Over 130 versions of these dream homes were built coast to coast, each modified to fit local preferences and site. In comparison to several others, it seems Houston’s version is one of the most spectacular. 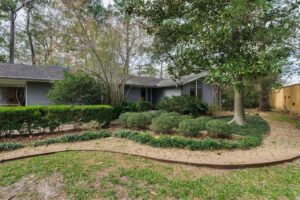 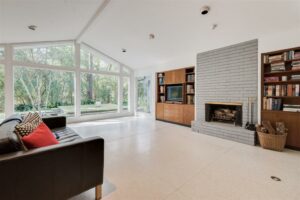 The highly regarded builder Al Fairfield constructed this attractive modern house in 1965 for the Jesse and Cathy Caesar family who have maintained it in mostly original condition.  The house can be considered a Mad Man Mod since Jesse Caesar was involved in marketing and devised the iconic ‘Tiger in Your Tank’ campaign for Exxon plus other successful campaigns.

Architect William Floyd helped Al Fairfield become established in Houston. Fairfield built hundreds of fine houses, mostly located in the Memorial area. Later, at the request of folks who bought his houses, he developed office buildings which were the start of the Energy Corridor. He worked with several architects including Floyd, Bill Caudill and Waller Poage.

If you have information about these houses or other vintage mod designs, please share it with Houston Mod so it can be included in the Modern in Houston archive.
Copyright 2003-2023 © Houston Mod. Thoughtfully designed by Black + Gray Studio.