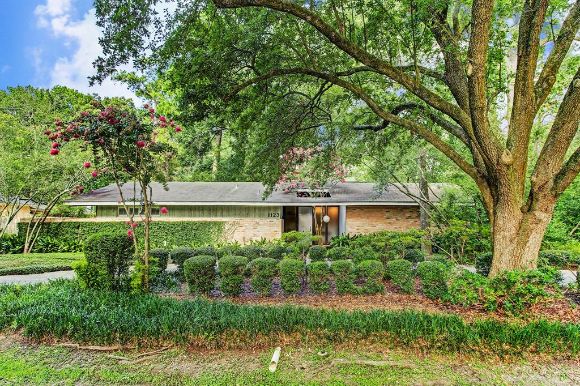 Help us find new preservation-minded owners for these architect-designed vintage modern houses located about 9 and 14 miles west of downtown Houston. The June event focuses on designs by lesser known Houston mid-century modernist architects. Two houses are open for touring and two are featured as drive-by status. Thanks to Houston MODern Market for sponsoring this FREE event. Join us on Sunday, June 23, 2019 from 2 – 4 PM.

The floor plans are dated April 1959 for this upscale custom designed one-owner house located in desirable Hilshire Village. Sought after features such as gently sloped wood beamed ceilings, walls of glass, spherical hanging light fixtures, and pecky cypress siding along with a free-flowing design make this house a keeper. Of special note is the imaginatively designed attractive carport which can serve as a grand mod entertaining space. The site design has a number of well-chosen period elements.
Architect David C. Strickler (1932 – 2018) designed the house. Strickler graduated with an architecture degree from Texas A & M University in 1955. For his own family, he designed a flat-roofed modern house located across the street from 1123 Guinea. His house has unfortunately been demolished. He designed a number of country clubs and show houses for developments around the Houston area. One of his NASA area designs was featured in Better Homes and Gardens Home Building Ideas publication in 1966. Another of his outstanding designs is the St. Catherine of Sienna Catholic Church located in Houston.

Architects Wahlberg and Morales designed this imaginative 1959 modernistic house using concepts not often found in other houses of the era. It has two stories and a tall steep roof with an A-framed portion incorporating beams dramatically extending to the ground. A courtyard rich in materials and shapes welcomes you from the long driveway, opening wide past the double carport and flowing beneath a broad vine covered arbor. Paving and edging elements are varied and creative. Past the entry courtyard, the site design becomes progressively more relaxed with curving paths leading into the ravine area complete with a two-level playhouse which mimics the house design.  There are a number of additional surprises with the biggest being the dramatic cathedral living area overlooking an expansive pool and wood deck extending deep into the sloped site. A floating brass-trimmed stairway, walls of brick and glass, cabinets, flooring and trim of redwood and many other special components complement the scene.

Paul Wahlberg (1928 – 2010) and Richard Morales (1927 – 2012) were early 1950s graduates of Texas A & M.  Whalberg was known for his reassuring nature and Morales for his graphic abilities.  They designed a number of custom homes including a flat-roofed favorite in Glenbrook Valley featured on a past Houston Mod tour.  By the 1970s, they focused mainly on multi-unit housing, eventually developing over 80,000 units in 23 states.

This one owner mod was designed by the homeowner and architect Warren A. Goulas (1928-2004) who lived next-door at 8010 Anadell Street, another house he designed and a MOTM in 2006.  Goulas was a 1952 Texas A & M graduate. His work includes a bank in The Woodlands, 170 houses in Pasadena, and projects for Spring Branch ISD. His son is also an architect and lives in the neighborhood.

This original owner house was designed by Frank S. McFaden, Jr.(1932-1994) for his family.  Originally from Montgomery, Alabama, he was a 1954 graduate of Auburn University.  He had his own firm in Houston until 1970 when he began working for a metal building components company.