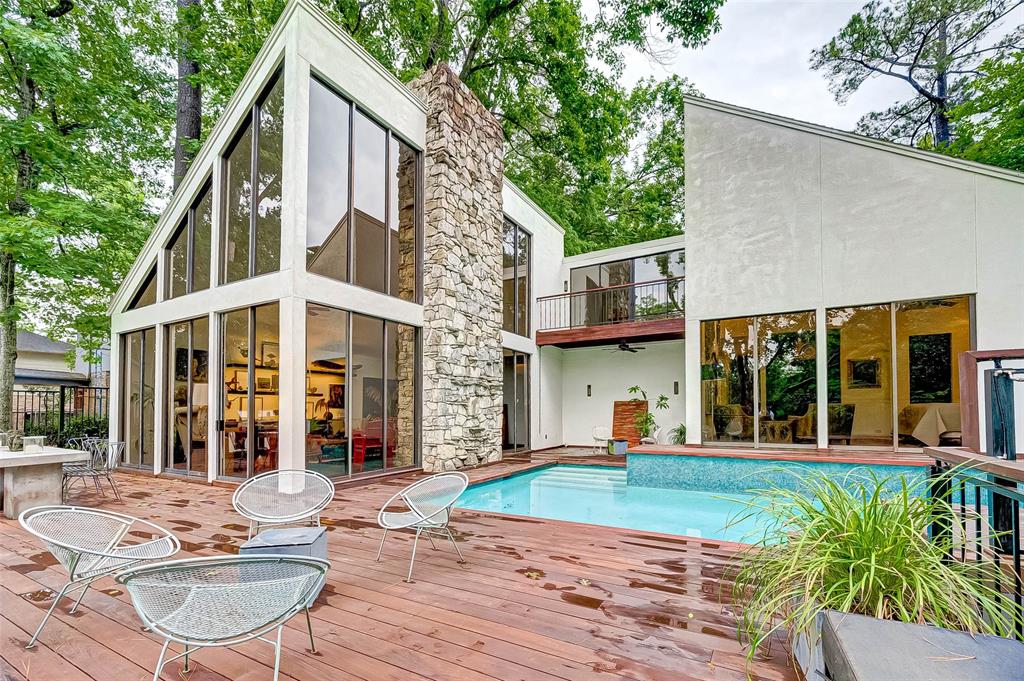 Masks are suggested to be worn for this event.
Please resist touching surfaces and maintain 6 feet of social distancing 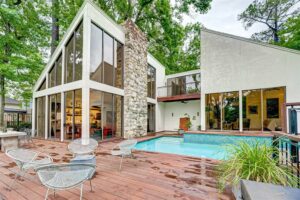 Records show this eye-catching and well situated vintage modern house was built in 1971 by John Knerr for Dawson Sterling of American General Life Insurance Company. It is an early example (for Houston) of Shed Style architecture which began at Sea Ranch in 1965. Features of the Shed Style include seamless roof to wall intersections, overall asymmetry with strong lines, recessed main entrance and a one to two story height.  Passive solar design elements like masonry flooring and stone walls were incorporated on the more innovative examples.

Prolific mid-century architect Lucian Hood, Jr. is credited with designing this house which shows little relation to his earlier modern works. By this point in his career he designed mostly traditionally styled houses.  While still in school at the University of Houston, Hood worked for architect Philip Willard who had a large office and employed other Hood classmates such as Lars Bang, the Brooks brothers, the Flynn twins, and A. Carroll Brodnax.  They gleefully attempted upstaging their architecture professor Howard Barnstone in the field whenever possible.  Hood later partnered with Lars Bang where they designed and built several office buildings for Kenneth Schnitzer.  Later Hood established his own firm where he worked mostly alone but sometimes with his son Lucian T. Hood who is an architect now working in the Los Angeles area.  Lucian Hood, Jr. had tremendous graphic abilities and created captivating architecture. His extensive archives are now preserved, facilitated in part by Houston Mod, at the University of Houston Special Collections library. 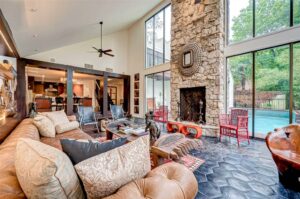 If you have more information about these, or other vintage modern houses and/or architects, please contact Houston Mod so we can include it in our Modern Houston Index on our new website.

The Mod Squad will be on hand at Sunday’s event to assist with membership and publication purchases.  After Alden: Midcentury Architecture in Brazosport, Texas, Houston Mod’s new publication by Marty Merritt with a forward by Stephen Fox and photography by Benjamin Hill, will be available at Sunday’s event along with our other publications. Or, you may purchase a copy online at our website.