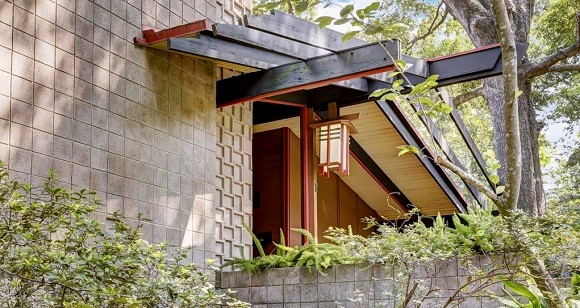 The organic concepts of legendary architect Frank Lloyd Wright inspired this magnificent original owner house situated on one of Houston’s most picturesque streets. Architects Frederick MacKie (1905-1984) and Karl Kamrath (1911-1988), both graduates of the University of Texas, designed this house for the A. J. Ballantyne family in 1958. It was built in 1961 on two wooded ravine-front lots next to Kamrath’s own house. Kamrath was so inspired by Wright that he based his career on Wright’s concepts, eventually leading to several meetings and a friendship with Mr. Wright. Kamrath’s designs were popular in making modern design appealing to a wide audience and earned the firm local and national recognition.

As do many Wright and Kamrath designs, the front elevation projects a sense of mystery. Transitioning the reduced scale entry, the spaces expand in several directions. The floor elevation descends several steps to the living area while the wood beamed ceiling rises above leading to walls of plate glass viewing broad outdoor living space in the naturalistic setting. A portion of the living area projects out into the ravine. The plan is based on a 6′ x 6′ grid and incorporates five bedrooms and six baths, a spectacular fireplace, and abundant built-ins and storage space. A swimming pool is located in a terraced area of the over two acre lushly landscaped grounds which were designed and planted by Dr. Ballantyne.