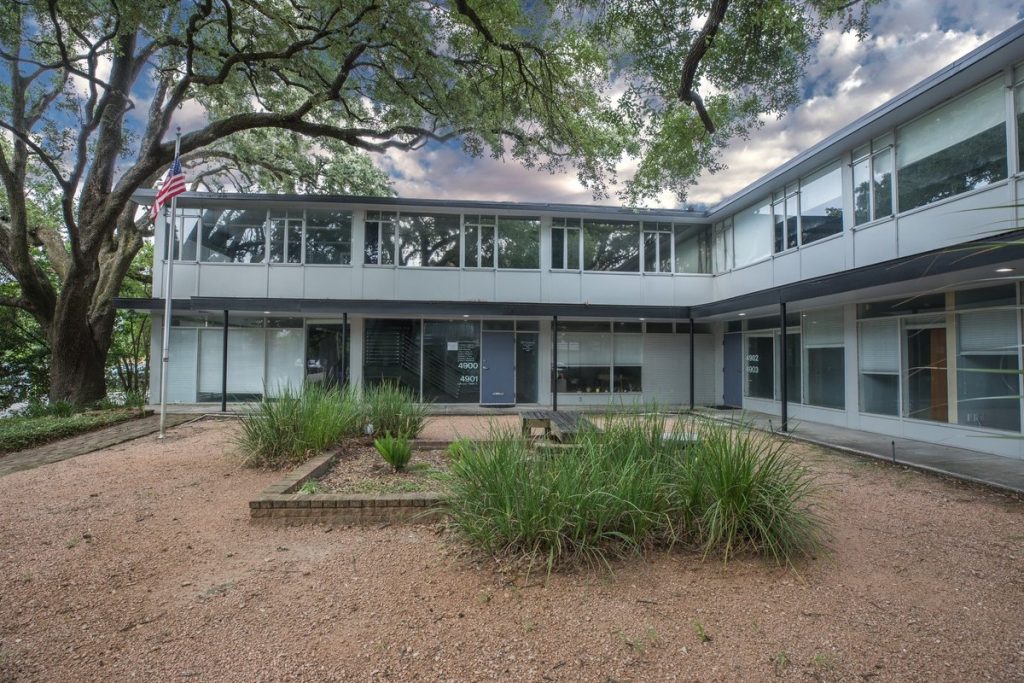 Ideally situated a block off Main Street in the Museum District, this handsome vintage modern building has made an important contribution to Houston’s architectural scene and still provides a world of options. An L-shaped layout creates a generous shaded park-like central courtyard open to the interior spaces. The 1952 building was originally the offices of architect Philip G. Willard, designed and constructed by him with his Ceramic Construction method. Philip Willard had one of the busiest architectural firms in Houston where he employed a number of talented architects and architecture students who went on to have successful offices of their own. Some include Lucian Hood, Lars Bang, David Brooks, Edward Brooks, Arthur Flynn, Charles Flynn, A. Carroll Brodnax, Donald Minzenmyer, James Magee, Donald Baker, and G. Marvin Watson.

The building also contained offices for William Jenkins, William Hoff, Gerald Tackett, Richard Neugebauer, William F. Stern and Associates, Stern and Bucek Architects, and Curtis and Windham Architects. In addition, it was a Golemon and Rolfe satellite office for the design of Houston Intercontinental Airport. Designers Jens Risom, Ben Rose and Boris Kroll had one of Houston’s first modern design showrooms there. Artists have also used the spaces.

Philip G. Willard was from San Antonio and a 1934 graduate of the University of Texas. He was first registered to practice architecture in Texas in 1937. He moved to Houston from Ft. Worth about 1945 and opened a successful firm where he employed many of the top students from the UH College of Architecture. He developed a masonry construction system called Ceramic Construction. His buildings using the technique are durable and highly acclaimed. Mrs. Willard was an interior designer who had her own furniture and design store. Houston Mod’s latest publication, described below, contains further details about Willard’s work.

Across the street from Sunday’s MOTM, don’t miss the Art Deco style Lawndale Art and Performance Center (1930) by Joseph Finger and next door is MacKie & Kamrath’s Weldon Cafeteria (1949). These buildings were the location of Houston Mod’s first event. Nearby at 5115 Main is the endangered Bank of Houston Building (1967) by Wilson, Morris, Crain & Anderson. If you can provide further information about these or other mod buildings, please contact Houston Mod so it can be included on our Modern in Houston collection.