William Caudill, one of Texas`s most important twentieth century architects, chose this Memorial Bend house in 1959. The house was designed as an `on spec` house by William N. Floyd, an acquaintance from Oklahoma State University. Caudill was one of four Caudill Rowlett Scott founders who chose Memorial Bend for their first Houston home. Caudill served as a practicing architect in his firm Caudill Rowlett Scott and the Director of the School of Architecture at Rice University from 1961 until 1969, influencing several generations of architects as an author, professor and architect. He was posthumously awarded the AIA Gold Medal by the American Institute of Architects in 1985.

As is typical of Floyd`s designs, this house has a plain, austere facade that betrays the house`s spaciousness and light. The entrance is highlighted by a cantilevered entry roof. The front wall might lead one to believe that the home is dark yet the interior is lit up by a series of floor-to-ceiling windows that overlook the house`s lot overlooking Rummel Creek. A mirror image of this house, recently altered with the addition of a gabled roof, is located at 406 Electra.

An addition and garage were added on the east side of the house but are very much in keeping with the original design.

Caudill then built a house for himself and moved into it in 1963. 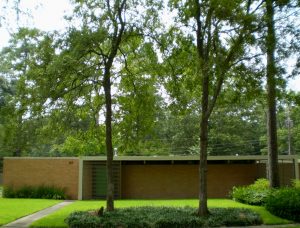 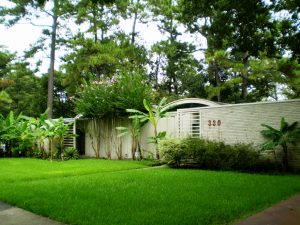 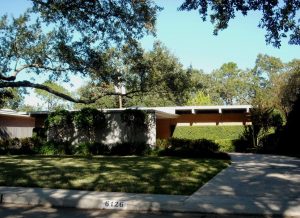